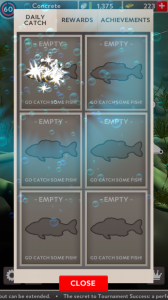 Lane has been a Software Developer at Concrete Software for over a year and has been a great asset.

In his time at Concrete, Lane has worked on major titles such as Rapala® Fishing – Daily Catch and its most recent Saltwater update. Some of his favorite parts have been working on the shark encounters and the rewards sequences, especially when you catch a monster or legendary fish!

Lane says his favorite part about working at Concrete Software is the work environment – not only are his coworkers fun to be around, but they are also experts in their given craft and easy to collaborate with. He also likes how the company encourages everyone on the the team to share their ideas and think out of the box.

When he’s not at Concrete, Lane makes his own digital and board games! He even teaches a board game design class in the Twin Cities. It’s safe to say he loves all things games!

Lane credits his competitiveness and in-and-out knowledge of strategy games as a useful asset for his job, giving him not only passion but also a high level of competence in his workflow. However, he also says a necessary skill is to able to recognize your own bias, as what you want or envision for a project may not be in line for what is being produced, so sometimes stepping back and keeping an open mind is crucial.

A big piece of advice he gives for any professional field – but especially programming – is keeping yourself accountable to keep learning and perfecting your craft, although he admits it’s easier said than done. The first thousand hours can be shaky because it takes time to get comfortable when learning a new skill, but he says being held accountable by a team to create content is what pushed him the most, such as participating in game jams and working on professional projects.