We are lucky to have Rawson Stovall designing games at Concrete Software! Check out this great article on Rawson and his impact on the video game industry!‪

Today, video game reviews are a way of life in the gaming world. But it wasn’t always like that.  In fact, in 1982 video game reviews were a rarity.  Despite the ongoing video game craze of the time, reviews of new and upcoming titles were relegated to a handful of monthly magazines that often went to print well after the game had hit store shelves.  One young man named Rawson Stovall aimed to change that.  At the tender age of 11-years-old, Stovall became the first syndicated video game reviewer in history, starting a column that spanned across video game generations and brought him to his own levels of fame. Read the full story on Syfy.com

Hearts is one of the most popular card games around the world. Aces® Hearts brings this timeless card game to Android with extra and opulent flare. Try and “Shoot the Moon” against 10 fun and friendly Heart players such as Elouise, Vladmimir, and Drucilla. Customized game points settings (50, 100, 200, 500) and 5 levels of difficulty make this a card game that you’ll enjoy playing over and over on your Android device. Don’t remember how to play Hearts or need a refresher? We have a step by step tutorials to make Aces® Hearts easy and fun for everyone!

Gin Rummy at its best
Concrete Software’s beloved Aces® Gin Rummy has been improved and updated to support newer devices and larger screen sizes. We tuned the game’s performance, upgraded the AI and added requested features such as manual card sorting. 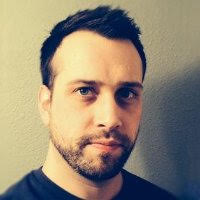 Before joining Concrete Software, Ty worked as a Game Artist and Gameplay Designer on several successful mobile games in the last few years, including the multi award-nominated Strata. Ty hopes to bring an innovative vision to Concrete’s upcoming titles. The majority of his career has been spent developing games with the Unity engine, touching every aspect of development from UX design to particle-based special effects.

Ty founded Wallride Games last year in Minneapolis, Minnesota developing 2D multiplayer indie games for Steam and consoles. Former clients include Disney and Warner Bros. He has also collaborated with several indie game studios. Ty is an active member in the local IGDA and enjoys sharing projects and presenting his work to the local gaming community throughout the year. In his free time, Ty develops tabletop games for fun.

In NHL Hockey Target Smash, players compete in timed shootouts against rival NHL® teams in multiple seasons and playoffs in the hopes of winning the Stanley Cup® Championship. NHL Hockey Target Smash features all 30 NHL teams, jersey personalization, realistic virtual players, stat tracking, and the ability to enhance skills and equipment throughout the game such as with unlockable sticks and pucks.

“Being from Minnesota — the state of hockey — we are ecstatic to bring an engaging hockey game to mobile devices,” said Keith Pichelman, CEO of Concrete Software. “NHL Hockey Target Smash translates the fast-paced, strategic, and competitive nature of hockey to be easily-accessible to all mobile players, including casual gamers and hardcore hockey fans.”

Since 2003, Concrete Software has been creating rock-solid games across all major mobile platforms, including iOS and Android. Their game PBA Bowling Challenge has nearly 11,000,000 downloads and is one of the top-ranked mobile sports games. Find out more at www.concretesoftware.com.

NHL, the NHL Shield and the word mark and image of the Stanley Cup are registered trademarks and NHL Hockey Target Smash is a trademark of the National Hockey League.  © NHL 2015.  All Rights Reserved.