Welcome to Rapala® Fishing Pro Series! Rapala® is looking to sponsor the next great angler to be part of their Pro Series team, do you have what it takes? Compete in world-class tournaments and daily challenges all to improve your skills by earning bonus money to climb the ranks and become a professional angler for the #1 fishing brand in the world.

Build your reputation, gain sponsors, battle for awards and trophies as you try to catch the top 17-species of fish from Large Mouth Bass to Northern Pike in some of the most iconic fishing locations in North America.

Unlock and choose from 100s of authentic lures and equipment combinations as you try to outsmart your competition.

Unique above and below water catch-cams will allow you to fight fish with great visual representation and true-to-life battle action! New tournaments will appear daily, encounter real world weather conditions, character creator, monster and legendary fish are just some of the great features waiting for you in Rapala Fishing Pro Series, so start your angling career and “get fishin’ TODAY!”! 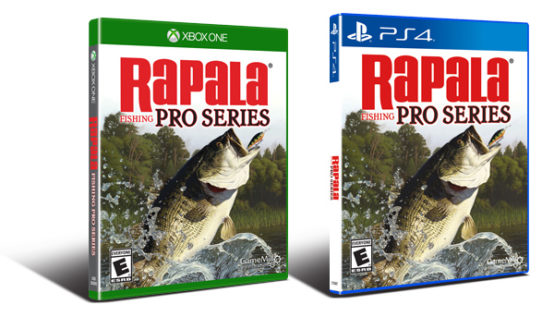 Available Now on the PlayStation 4 and Xbox One.

MINNEAPOLIS – October 31, 2017 – Concrete Software is proud to have been featured at Google’s Firebase Dev Summit 2017 in Amsterdam, Netherlands.

The Firebase Dev Summit is Google’s annual event showcasing the latest product releases and features. Developers learn how Firebase helps solve key infrastructure and growth challenges for their app. Concrete Software partnered with Google to test the new Firebase Predictions feature in their games. The results were extremely positive. Concrete Software looks to continue their work with key partners like Google to build better games.

MINNEAPOLIS – August 24, 2017 – GameMill Entertainment has revealed Rapala Pro Series, a new fishing game coming this fall for the PlayStation®4 computer entertainment system and Xbox One. Compete in a far-reaching series of tournaments across North America to build your reputation and become the next Rapala Pro Angler!

An authentic experience featuring real lakes and officially licensed Rapala equipment, Rapala Pro Series takes players on the hunt for dozens of the sport’s top fish species. Navigate six sprawling environments with GPS, track fish with the fish finder, and master what lures and tackle work best to land each prey. Then use your winnings to purchase new and better boats, reels, poles, apparel, lures and lines.

Rapala Pro Series delivers a destination fishing adventure with picturesque views of North America’s top lakes both above and below water. Explore each living environment by boat, choose where to cast your line and complete a variety of challenges to take your career further. There’s also a Free Fishing mode for pick-up-and-play gaming, as well as global leaderboards and daily online challenges to compete toward.

GameMill Entertainment, located in Minneapolis, Minnesota is a third-party publisher of casual games for the mass market consumer. Development platforms include PC, Nintendo handhelds and consoles including Nintendo 3DS™ , Wii™ and Switch™ Microsoft consoles including Xbox One® and Xbox 360® video game and entertainment system, XBLA, Microsoft Games On Demand for Xbox One® and Xbox 360®, and Sony consoles including PlayStation®3 and PlayStation®4 computer entertainment system, PlayStation Network™ and Mobile & Tablet devices. With development across the globe, GameMill is a source of entertaining and fun games for all ages. For more information, please visit: www.game-mill.com.

Rapala was unofficially founded in 1936 when Lauri Rapala invented the Rapala fishing lure. Rapala has grown from humble beginnings to become a market leader in the fishing tackle industry. The brand’s functionality and high quality are known by fishermen worldwide. Rapala maintains its strict standards of craftsmanship while delivering its fishing products to anglers in more than 130 countries. For more information on Rapala, please visit www.rapala.com or www.facebook.com/RapalaUSA or www.instagram.com/rapalausa

Brittany has been our Monetization and Advertising Manager for over a year now. During this time she’s helped us acquire new users as well as give feedback on each of our games. She brings a new perspective to Concrete with her creativity, people skills, and pie charts!

Brittany says she’s always loved the opportunity to work with other people. Thus why she attended Southern Connecticut State University  to study Organizational Communication and went on to work with a wide variety of people and industries. Previously Brittany worked in the music and entertainment industry in sales. In her college years she worked at Six Flags as an intern where she helped run their events.  As a kid she loved playing playing RollerCoaster Tycoon and when she looked for work in Minnesota she saw games as another fun place to meet new people.. When she first came to Concrete she says she was not really a big mobile gamer, but after working at Concrete she’s fallen in love with playing Concrete Software’s Aces® Hearts as well as several other games.

In her job, Brittany says she gets to watch her ideas impact the games and her relationships grow. She ensures our games are fun, engaging, and also thinks up creative ways to bring new users to our game.

Deborah is a very talented 2D game artist, creating all kinds of art at Concrete Software for over four years. She received her Illustration degree from the Minneapolis College of Art and Design (MCAD) and joined our team shortly after. Deborah adds spunk to our company with her high energy and creativity (and little bit of San Antonio sass). In her spare time she enjoys playing basketball and floor hockey with her friends and cuddling up with her adorable puggle Sandji.

At Concrete Software Deborah creates characters, backgrounds, textures, and attractive promotional artwork for our games. Here are just a few of the Aces Cribbage characters she created!

Although Deborah loves creating 2D art for all of the games, Arctic Cat Extreme Snowmobile Racing is Deborah’s favorite because she thinks it’s one of Concrete’s most fun games. “There’s also so much room for new content in Arctic Cat and it’s so much fun making new sleds and levels for it,” she says. Deborah creates just about all of the artwork in the game and has been the lead artist since the game’s initial design.

While Deborah certainly knows her 2D art, she finds herself learning new things every day. “I’m still constantly learning and that’s what I really like about this job is that I have to keep up. I have to continue learning programs, like Zbrush and Maya.” Deborah is also adding 3D to her list of skills at Concrete. She says, “3D is not something that comes naturally to me, so as a professional I have to learn 3D and all that software as part of my skill-set”. To other aspiring artists Deborah says, “Keep your skillset up-to-date. Make yourself valuable!”